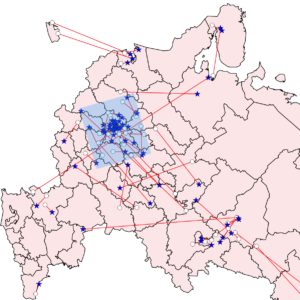 Abstract. We study the long-run effects of historical place-based policies targeting R&D: the creation of Science Cities in former Soviet Russia. The establishment of Science Cities and the criteria for selecting their location were largely guided by military and strategic considerations. We compare current demographic and economic characteristics of Science Cities with those of appropriately matched localities that were similar to them at the time of their establishment, and had similar pre-trends. We find that in present-day Russia, despite the massive cuts in government support to R&D that followed the dissolution of the USSR, Science Cities still host more highly skilled workers and more developed R&D and ICT sectors; they are the origin of more international patents; and they generally appear to be more productive and economically developed. We also rule out alternative explanations related to the differential use of public resources, and we find limited evidence of reversion to the mean. By estimating a spatial equilibrium model in our matched sample, we interpret these findings as the result of the interaction between persistence and agglomeration forces.