Knowledge Spillovers through Networks of Scientists 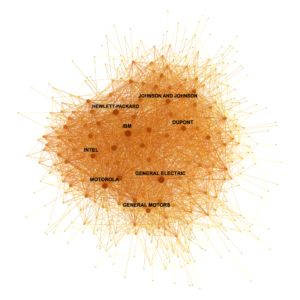 Abstract. In this article, I directly test the hypothesis that interactions between inventors of different firms drive knowledge spillovers. I construct a network of publicly traded companies in which each link is a function of the relative proportion of two firms’ inventors who have former patent collaborators in both organizations. I use this measure to weigh the impact of R&D performed by each firm on the productivity and innovation outcomes of its network linkages. An empirical concern is that the resulting estimates may reflect unobserved, simultaneous determinants of firm performance, network connections, and external R&D. I address this problem with an innovative IV strategy, motivated by a game-theoretic model of firm interaction. I instrument the R&D of one firm’s connections with that of other firms that are sufficiently distant in network space. With the resulting spillover estimates, I calculate that among firms connected to the network the marginal social return of R&D amounts to approximately 112% of the marginal private return. 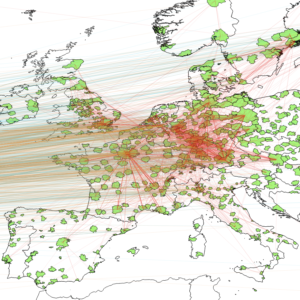 Abstract. We study the long-run effects of historical place-based policies targeting R&D: the creation of Science Cities in former Soviet Russia. The establishment of Science Cities and the criteria for selecting their location were largely guided by idiosyncratic considerations of military and strategic nature. We compare current demographic and economic characteristics of Science Cities with those of appropriately matched localities that were similar to them at the time of their establishment, and had similar pre-trends. We find that in present-day Russia, despite the massive cuts in government support to R&D that followed the dissolution of the USSR, Science Cities host more highly skilled workers and more developed R&D and ICT sectors; they are the origin of more international patents; and they generally appear to be more productive and economically developed. Within a spatial equilibrium framework, we interpret these findings as the result of the interaction between persistence and agglomeration forces. Furthermore, we rule out alternative explanations related to the differential use of public resources, and we find limited evidence of reversion to the mean. Lastly, an analysis of firm-level data suggests that locating closer to Science Cities generates localized spillover effects on firms’ innovation and performance indicators.